This post is about abortion. It’s not political. It’s not an argument about laws or the lack of them. It’s a call to mourning prompted by a terrible dream. I hope you will read it, knowing it was written with love and prayer. 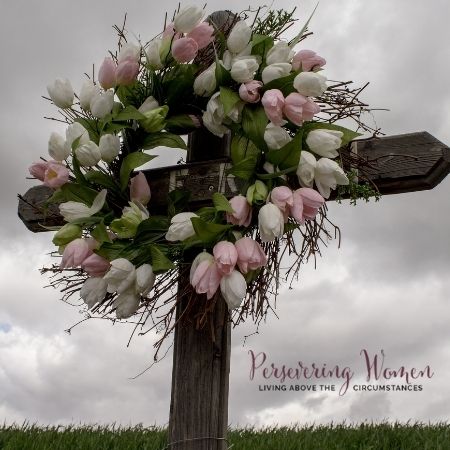 The following is a disturbing dream I had on Mother’s Day 2020.

Before you read it, I want to remind you that dreams are most often a distortion of reality. This dream was that for sure. I’m not touting it as a “spiritual” dream or a “prophetic” dream.

I’m not sure what it was.

It could have come from a soup of feelings I carry in my heart about abortion and the loss of millions— some sources say upwards of 50 MILLION—lives since abortion became legal in the U.S. in 1973—and a chastening of my own conscience for failing to mourn these deaths even more deeply.

Dreaming it on Mother’s Day, though, does not feel entirely coincidental. So maybe it was God speaking to my heart about remembering and encouraging others to remember.

When I woke up, I went to my computer and wrote the dream down.

This is the unabridged version.

“Today is Mother’s Day. I woke up in the early morning hours from a terrible dream. One of the worst dreams I have ever had. Like most dreams, some of it was surreal. But in the dream, I accepted what was happening as being perfectly normal—part of American culture. Someone had had a late-term abortion. The baby was born alive. It was put aside, left to die. We were in a house, not a hospital. I can’t even write what the person was planning on doing with the baby, other than it involved a stove. The terrible thing was, I wasn’t even appalled by this. It was normal. I was heating the oven. I looked to see if the baby had died yet. I will never forget how that baby looked. It was small but perfect, and it was about ready to die. All of a sudden I came to myself. I picked up the baby and held it and began to weep and mourn. I told the mother, ‘You don’t want to do this!’ I woke up with the most profound sorrow.”

Some readers’ first reaction might be to point out that the scene I dreamed could not be performed in America legally.

No. Of course not. God forbid! It was a dream.

But abortion, at any stage, is a horrific process. I’m afraid we’d rather not know the details of how a baby—nestled comfortably in what should be the safest of all places—is forcibly extracted.

But a little research might stir our hearts to mourn the biggest loss of life in our history. The Spanish Flu took about 675,000 American lives. The current pandemic has taken over 200,000 at this writing. Both appalling numbers, but only a small fraction of the lives lost through abortion.

The problem is, abortion has been with us so long we’re not horrified by it anymore.

Millions of lives lost, and we hardly notice. 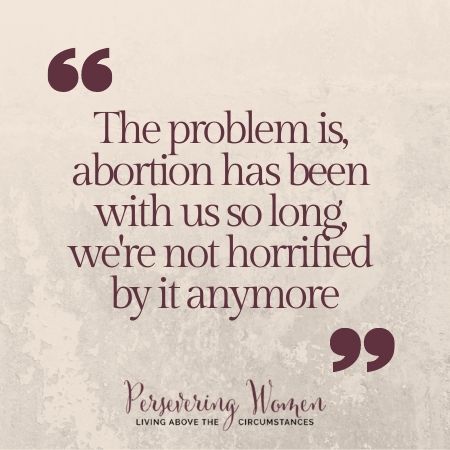 I love to read WWII novels. I’ve recently read two in which I followed the characters with bated breath as they resisted the reign of a war machine bent on destroying the Jewish people.

As I read those books, I wondered, how?—how in the world could Hitler have ordered the death of 6 million Jews, in the most inhumane, horrendous manner? And how could the guards have carried out those orders?

I believe there was only one way possible.

They stopped seeing their prisoners as people. That made it easier. They believed the Jews were sub-human and had no right to life. They had to think of them that way. It would have been too hard to turn on the gas otherwise.

Likewise, in America, pre-birth babies have been relegated to fetal tissue. It makes disposing of them easier on the conscience.

I’m not writing this article from a political standpoint.

I’ll leave it to others to make their case in court if they think it will do any good. I’m merely making a case for mourning. There’s something about acknowledging suffering through mourning that helps us to relate. That’s why we erect memorials to those who die in war. Three million people visit the Vietnam War Memorial in Washington D.C. every year to honor the more than 58,000 men and women who gave their lives. Fifty-eight thousand names are inscribed on that black granite wall. We may or may not agree with the war, but the dead deserve to be mourned.

MILLIONS of nameless babies have lost their lives. I believe they deserve to be mourned also.

In Romans 12:15  the Bible tells us to weep with those who weep. If we weep with others it’s because we feel their pain.

I wonder how much better our race relations would be in America if we could just acknowledge that people suffer while we’re not looking.

That justice is not always even-handed. That just because we don’t see it doesn’t mean it dosesn’t happen. Sometimes all we humans want is for someone to validate our pain by acknowledging it.

We should do that. We should all do that.

But the millions of babies who have been aborted in the last half-century couldn’t ask to be acknowledged. They couldn’t speak for themselves. They can’t stand in the streets and say See me! Care about me! So they are largely ignored. Millions of lives slipping away with very few mourning their passing. God forgive us.

In my opinion, the death of these children is America’s greatest loss—and her greatest sin—because of the sheer volume of the dead.

We should honor them with our tears. They deserve that much.

Jeremiah 9:1 Oh that my head were waters, and my eyes a fountain of tears, that I might weep day and night for the slain of the daughter of my people! 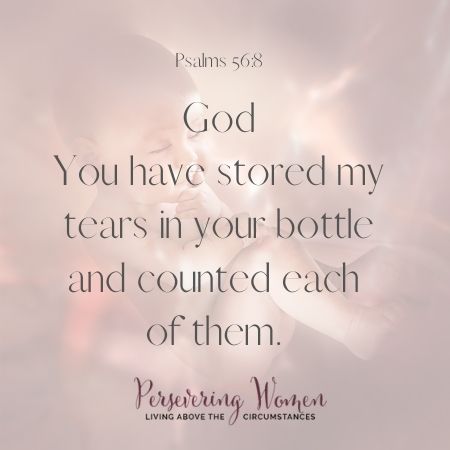 I believe America needs forgiveness. And we believers need forgiveness for forgetting these little ones.

In Luke 23:34 Jesus offered forgiveness for the people who unjustly crucified Him. “Father, forgive them, for they know not what they do.”

In I Corinthians 2:8 The Bible says that the rulers of the world didn’t know anything about God’s plan. If they had known about it, they would not have nailed Jesus to a cross.

They wouldn’t have crucified the Son of God if they had known who He was.

And I can’t believe there are many women who would abort their children if they knew who they were.

At twenty-two years old, I was unmarried and pregnant. I was scared. I was embarrassed. I hate to admit it, but I hoped for a miscarriage. I may have even prayed for one. But instead of giving me a way out, God gave me a beautiful daughter, Rebecca, who co-authors this blog with her momma. God had a plan for her. A future. If I could have seen that future, I would never have wished her gone.

The most prominent argument for abortion “rights” is that women don’t want the government to intrude in their personal lives.

I think that’s an understandable argument, and I respect it, although I think it’s a faulty premise for abortion. I don’t want the government intruding in my life. I think there’s way too much of it. A woman’s womb doesn’t belong to the government. Neither does the baby (or fetus if you’d rather) that’s inside it.

It’s not the government we ultimately have to answer to. It’s God.

Psalm 139:13, 16 For you formed my inward parts; you knitted me together in my mother’s womb . . . My frame was not hidden from you, when I was being made in secret, intricately woven in the depths of the earth.

I love this scriptural depiction of God watching as a baby develops. He sees the moment of conception, the division of cells as they become tiny legs and arms—the first beat of a newly formed heart. And He sees when that heart stops. What do you believe He thinks about that? I think He cries.

How can believers not rent their garments and wail with grief over this slaughter of innocents?

I don’t want this article to be used as a stick to beat the already burdened hearts of women who regret having aborted their children.

If that’s you, I know you were desperate. Society lied to you. You wouldn’t have done it if you had truly understood. Know that your child is well and safe, and you are forgiven. Let condemnation go and mourn as part of a nation, not as an individual.

I cannot help but believe that America will suffer for what she’s done to these millions of children.

I’m praying that believers who have hardened their hearts to the truth about abortion, and believers who know the truth but have become apathetic, will pray for forgiveness. God will hear us and forgive us if we do.

Rebecca is going to share a few words and tell you about a wonderful free gift we have for you. So here is my beautiful daughter.

Thanks, Mom! I’m glad to be alive and working on this blog with you!

As many of you know, I’m a Registered Nurse. I’ve worked in many areas of women’s health including gynecological health, labor and delivery, postpartum, and now I am working as a lactation consultant. I could put up a sign saying, Babies are My Business! 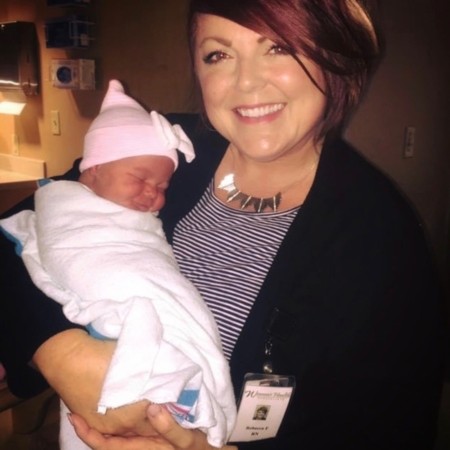 I’ve seen a lot of worried mothers throughout my career and bringing calm in a crisis is one of the things God has called me to do. Being around babies is one of the greatest joys of my life. Even though I’ve helped many mothers bring their beautiful healthy term babies into this world, I have also helped deliver many babies born way too early and under dire circumstances. And every single time I have marveled at how developed they were already, wonderfully and beautifully made by God.

That’s why it breaks my heart to think of the millions of babies who have lost their lives.

My mom and I are asking you to share this important post with as many people as possible. We want to see thousands of shares, so please help us with that! Our country is in trouble. We need to get this message of repentance and mourning out. And we also want mothers who have made the decision for abortion to find forgiveness and peace in their hearts.

We’ve got a free gift for you! In my mom’s free ebook, I was a Stranger, she talks about how whatever we do to the least of God’s children we do to Him. It’s a book about how we should treat strangers and people who are different than us. It’s full of serious stuff and funny stories and yummy recipes–only she forgot to put the flour in the Best-in-the-World brownies.

The new version coming out will fix that mistake but in the meantime just make a note 1 and 1/2 cups flour in the brownies and pray for my mom’s memory. Thank you for taking your precious time to read this article. It’s an important one so we ask you to share it with lots and lots of friends and family. Maybe to your whole list!  Everyone needs to read this! Please download your free gift below, and subscribe to get a new post about once a month. You can unsubscribe at any time.